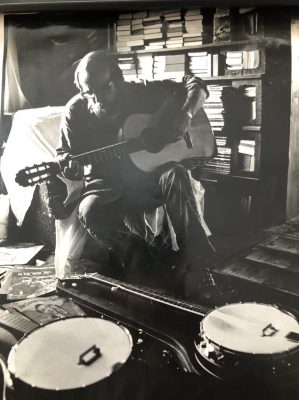 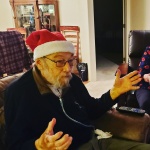 Mr Santa 2019
Buzz wearing the Santa hat that Libby sent in the car with Corey, Eschan and Scott.

Buzz with Jordan and Jessica

Candy Bar Talking Blues
This was one of the songs that Grandpa would always play when we asked him to play the guitar.

If I were a carpenter
This is another song that I remember grandpa singing and playing.

Draft Dodger Rag
I remember playing this song for grandpa once, and him telling me that he had often played this one in shows when he was younger.

Buzz Circa 1973
Taken by his roommate John Morgan, photographer for the Colorado Springs Sun.

Faith and Eschan
The Kids at ryans wedding reception

Faith and Eschan
The Kids at ryans wedding reception

Christmas 2019
The last thing Buzz put together alone when he was so desperately ill was to put up the Christmas tree for all the grandchildren who were visiting for the holidays.
Obituary